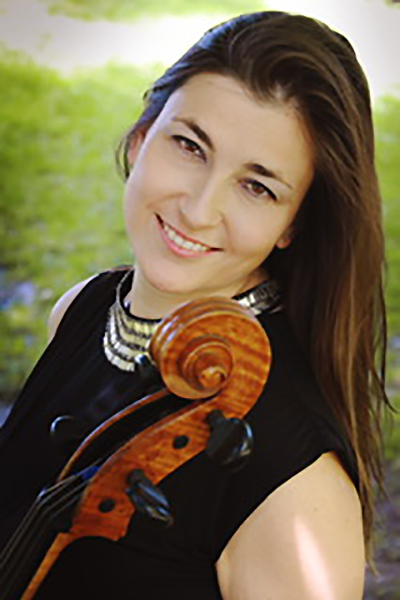 With a performance career spanning nearly three decades, Dr. Dobrochna Zubek has established herself as one of the preeminent cellists of her generation. A protégé of renowned cello pedagogue, Cecylia Barczyk, Ms. Zubek obtained her Bachelor’s and Master’s degrees from Baltimore’s Towson University and went on to receive the Prix de Perfectionnement from the Conservatoire de Versailles in France with Professor Barbara Marcinkowska. A seasoned competitor, Ms. Zubek’s awards include first place in the 2002 Peggy Friedman Gordon Music Competition, the 2004 Sidney Liebermann Competition, and the 2007 Alexandria Symphony Orchestra Competition. In an evolving and multifaceted career, Ms. Zubek has worked as a soloist, chamber musician, recitalist and orchestral cellist in Europe, the USA, Canada, and Mexico. As a member of the Canadian ensemble, Thin Edge Music Collective her performances have been enthusiastically received with her recent interdisciplinary performance, Move Towards Peace, being a shining example for her fluidity of style and comprehension of a vast array of art forms. Ms. Zubek’s recent international performances include a concert tour and series of masterclasses in China as a part of University of Toronto Faculty of Music New Music Festival which was held in the Conservatory of Music in Guiyang, Chengdu Conservatory of Music, and in the Chinese University of Hong Kong. Just recently, she finished her Doctor of Musical Arts in Cello Performance at the University of Toronto, where Ms. Zubek was Professor Shauna Rolston’s teaching assistant and the recipient of the YoYo-Ma fellowship between 2012-2016. Recently, Dobrochna just recorded her first solo CD entitled: “Mexico-Voyage,” and this Fall started teaching applied cello at University of Toronto.